Over the past two decades, concern for environmental degradation and climate change has gradually increased; as a result, it has been occupying a relevant place in the political agenda.

Scientific studies conducted so far have set out to demonstrate the man-made origin of this change, arguing that the continuous emission of greenhouse gases (GHG) is causing an increase in the average temperature of Earth, which will have serious social and economic consequences in the medium term. 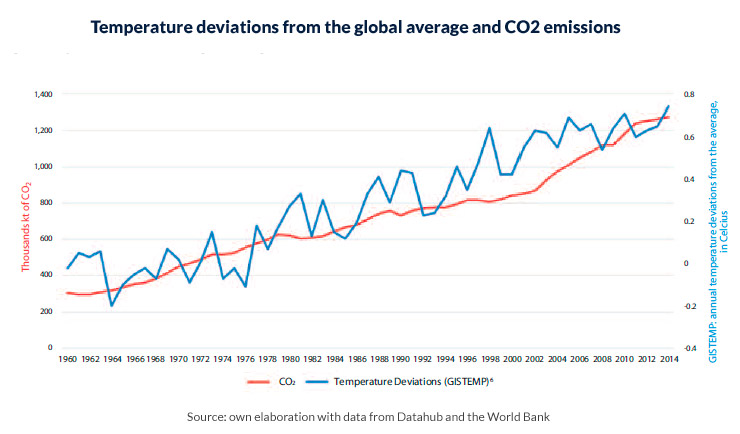 Initially, the focus was on the impact of economic activity on the environment and, derived from it, the necessary promotion of more respectful environmental practices. This is reflected by the extensive adoption of international standards such as the GRI Sustainability Reporting Standards. However, in recent years, numerous internationally renowned actors in the public and private sectors have strongly emphasized the consequences to which countries, companies, the financial system and the global economy are exposed. This has brought the need to understand the risks associated with global warming and the necessary transformation of the current production model to the top of the international political agenda.

Together with the increase in the rise of sea levels caused by the melting Arctic areas and the acidification of the oceans, various sources point to the increase in the frequency and severity of extreme events such as hurricanes or floods as one of the main consequences of climate change. These phenomena could cause serious damage to the world economy. According to the latest study by the renowned Carbon Disclosure Project, the world’s largest 215 companies estimate that their potential loss in asset value due to adverse climate impacts would be around 170 billion dollars, representing about 1% of their market capitalisation.

An example of this is that of PG&E, main electricity supplier for the state of California, considered by many to be the first case of bankruptcy to be directly caused by the impact of climate change. After the devastating fires that ravaged California in the fall of 2018, the electricity company officially declared itself bankrupt, as a consequence of the terrible damages suffered in its infrastructure as well as having to face millions of obligations for the its role in the origination of those fires due to its electrical system. It is broadly accepted that extreme drought and heat conditions were decisive in the start, spread and severity of the fires. Another example is that of the insurance sector, known to be one of the industries most exposed to physical risks arising from climate change. Annual insured losses globally have increased 20-fold since the 1970s, reaching an average of 65 billion dollars during that decade. In 2018 alone, this figure already was 85 billion dollars.

Some regions of the world and economic sectors will be particularly exposed to the risks of an increasingly unstable climate and rising water levels. However, in a globalized economy, climate change will affect all countries and industry sectors to a greater or lesser extent and will pose an important challenge to the stability of the global financial system.
Finally companies will have to face the challenges of adapting to greater social awareness new regulations and their impact on financial markets.

Concern for climate change has taken a leading place in global collective consciousness. Many studies show that a large number of consumers would not only change their habits in order to lessen their impact on the environment, but would also like companies to help them live more sustainably. In the US market, data shows that during the 2014-2017 period there was growth in sales of products classified as “sustainable”, superior to conventional products.

This trend is leading to the emergence of new opportunities and business models based on respect for the environment, resource sharing and sustainability criteria. It is also generating risks, such as those derived from how society has come to perceive certain industries as having a negative impact on the environment, as reflected by the increasingly common social movements demanding that governments and companies take drastic measures to combat global warming.

As a result of the above, over the last few years there has been a wave of judicial processes that have set a new precedent, as they have introduced the concepts of “climate responsibility and climate rights”. This phenomenon is gaining special strength in the United States, and it is not surprising that fossil fuel companies are the ones most affected. According to Michael Gerrard, founder of the Sabin Center on Climate Change Law at Columbia University, more than 1,000 climate lawsuits have been initiated in the US.

One of the most controversial recent cases has been the lawsuit against oil giant Exxon Mobil. The company was accused by the states of New York (and recently acquitted by this state) and Massachusetts of misleading its shareholders about the real costs and risks of climate change in the company. Total is another oil company that has also been sued by several cities and NGOs, accused of not making sufficient efforts to mitigate climate change. Also, more than 10 cities in the USA, from New York to San Francisco, have sued large fossil fuel companies for the damages suffered as a result of global warming. In addition, in 2018, a group of fishermen from California and Oregon sued 30 large fossil fuel companies for their role in climate change and the damage caused to their activity. Lastly, in line with this wave of judicial processes, a Filipino human rights commission opened a judicial hearing in New York to study whether large oil companies are violating human rights by being direct contributors to climate change.

The public sector has also been impacted by this wave of litigation from climate change. In recent years, citizens from the US, Canada, Netherlands, Ireland and Pakistan, have sued their governments for not acting with sufficient determination to reduce greenhouse gas emissions and drive a transition to a sustainable economy.

This upward trend in litigation from climate change is a huge risk for companies, especially those in industry sectors that cause large-scale GHG emissions.

The Paris Agreement established objectives at international level in order to “keep the global average temperature increase well below 2°C with respect to pre-industrial levels, and continue efforts to limit that temperature increase to 1.5°C”. This commitment implies that the signatory countries must establish measures to quickly reduce their greenhouse gas emissions and favor the transition to a decarbonized economic system, which requires a drastic transformation of the economy in all productive sectors.

However, an unanticipated transition to a low-emissions economy could originate major shocks in the global economy. Therefore, in recent years, various regulatory bodies and multinational entities, mainly in the financial sector, have focused on developing recommendations, and subsequently regulations, to favour the consideration and management of risks arising from climate change. Their aim is twofold: on the one hand, to better understand the climate risks to which the economy is exposed in order to manage them, and on the other, to favor the transition towards a low GHG emission economy through the acknowledgement of these risks. From the recommendations of the TCFD, which are being adopted by key organizations in both the public and the private sectors, to recent EU and Bank of England regulations, the standards and regulations on climate risks have not stopped moving forward, expecting momentum to continue into the coming years.

The adaptation of financial markets

The 2008 crisis reflected the importance of recognising all types of risks to which companies are exposed. Institutional investors and insurance have increasingly been asking companies - especially those in more vulnerable industries, to be more transparent about how climate change impacts them and how they plan to deal with the potential risks.  One of the most relevant examples is the recent BlackRock announcement stating that it will stop investing in companies that are not sufficiently transparent in ESG matters. 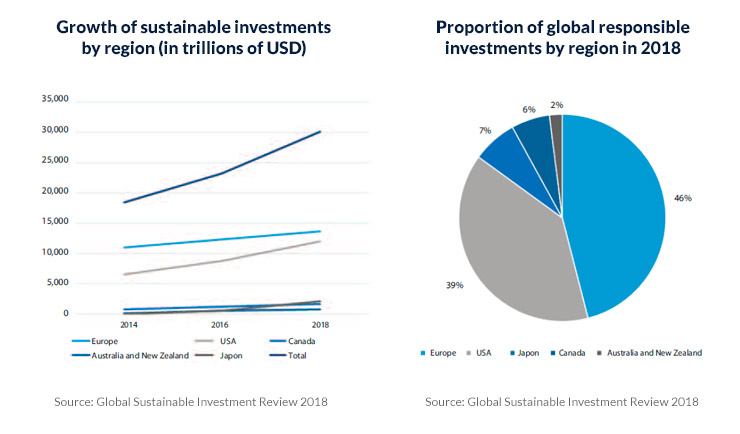 On the other hand, the growing demand for “green” financial products by investors, together with unclear standards in relation to what is considered a sustainable financial product (including significant methodological differences in how specialist agencies rate ESG issues) has resulted in the growth of the so-called “greenwashing” effect. To address this, security markets regulators from different geographies have taken different measures to make sure criteria are implemented in a more transparent and homogeneous way  (e.g. Sustainable Finance Plan for the EU, or the review by the British FCA of the “ethical investments” sector).

A context of new opportunities

Despite its inherent risks, climate change also brings new business opportunities, mainly in those areas that are conceived as solutions to the problem. Such is the case of low-carbon emission products and services, transports that do not involve intensive use of fossil fuels (e.g. rail and electric vehicles), alternatives for generating and transporting electricity through renewable or less polluting energy, engineering for the design and construction of plants in which these alternative energies are generated, etc. Additionally, climate change is perceived as an opportunity for companies to improve their positioning and reputation.

An example of these are the strong stock market revaluations experienced by those companies that have opted for green energy, so much so that it caused concerns that too high valuations might  lead to a “green bubble".

In this context of new investments, the President of the European Commission (EC), Úrsula Von der Leyen, communicated in her opening speech at the UN Climate Change Conference (COP 25) in Madrid that the EU would publish a European Sustainable Investment Plan as part of the New Green Pact, which will include an investment of one trillion euros  over ten years. She also referred to that plan as the "new growth strategy for Europe". The Governor of the Bank of England (BoE), Mark Carney, who also spoke on the matter at COP 25, estimated that an investment of about $90 trillion dollars  in infrastructure between 2015 and 2030 will be necessary, which would mean great opportunities in different sectors (e.g. energy, transport or food).

The channelling of funds towards these opportunities manifested in the financial sector with the booming supply of specific financial products such as “green bonds” (fixed income products aimed at financing projects that meet certain environmental criteria, activities identified as sustainable or projects whose aim is to mitigate climate risk).

Additionally, other products have been developed within the financial sector that can reduce the required impact of capital investment on climate change. Some of these new products are green loans and deposits, energy efficiency financing plans, support for innovative start-ups, linking interest rates to sustainable performance or conservation finance. 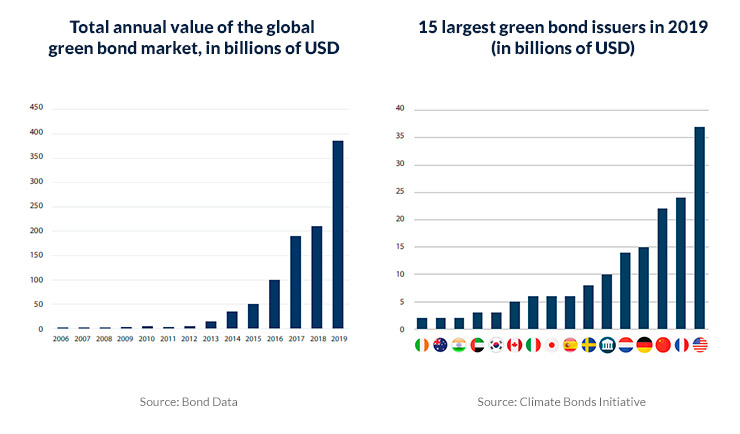 Economic actors will face enormous challenges to adapt to the new social context, growing regulatory pressure and increasing demands from investors as a result of climate change. The starting point is to recognize this risk as an emerging transversal risk which companies need to examine in greater depth to ensure they understand its nature, to properly assess its impact and to embed it into their risk management frameworks. In parallel, they should review their strategies and undertake plans to transform their business models.

In this context, this document aims to offer a perspective on the present and future of the risks associated with climate change for organizations. For this, the document is structured in the following sections:

Finally, it should be taken into account that, although the correct denomination of these risks is “risks derived from climate change” based on their cross-cutting and multiple impact nature, variations of this denomination, such as climate change risks or simply climate risks, will also be used throughout this document. In the same way, we will refer indistinctly to climate change and global warming and, although CO2 is not the only gas whose atmospheric accumulation causes this phenomenon - since other GHG such as methane or water vapour are also the cause - we will fundamentally refer to CO2 as its main inducer.

For more information, click here to access the full document in pdf (also available in Spanish and Portuguêse).